“And giving up reading it will make you happier.”  The Guardian

I admit to being semi-addicted to Facebook.  I get up every morning, make my hot lemon water, start the coffee brewing, and open up the computer.  My day just doesn’t seem to start off right without reading Sean Dietrich‘s daily post.  I get up an hour earlier than I really need to so that I can have that cup of hot water, check emails and get all the morning news I need via emails from friends and Sean.  With a healthy dose of food porn, cute photos like the one above of Steve, a New Zealand cat, and his herd of lambs. Or this one of Major, the Durham bull, dressed as the Durham Academy Cavalier.

But this past Monday night, thanks to Son #1 and the thought that I should be a better informed Américaine, I watched the first presidential debate.  Huge, major, God-awful mistake on my part.  I even sat with my trusty laptop on my lap following fact-checkers. Instead of looking at cat photos. Before the debate, Son #1 hooked up the Apple TV and brought up HBO’s Last Week Tonight with John Oliver, a show he is addicted to and has been nagging me to watch for a couple of months.  (This, my friends, is a great way to get the top news stories of the week and laugh at the same time.  Don’t watch it, though, if you object to cursing.  It is HBO after all and they say whatever they want to for those willing to pay less than Time Warner charges for cable and the ridiculous stuff on nightly primetime TV.)  Anyway, I should NEVER have watched that debate.  I should have respected my usual early bedtime (which allows me that extra hour to goof off in the morning) and called it a night.  Let’s just say that because I decided to stay up until 10:45 pm and be “better informed” my week did not start well.  Tuesday morning found me uncharacteristically grouchy.  A 9 on a scale of 0-10.  I am sure that my colleagues at the 7:25 am team meeting noticed.  I know that my advisees did because I walked away from our morning circle time.  They couldn’t come up with answers to whatever my question-of-the-day was and I didn’t feel up to cajoling them.  So I walked away without a word.  Took attendance instead.  All day long I just could not shake the “Our country is going to hell in a hand basket” feeling that had settled over me.  I posted on my FB page:

Trying to find calm this morning. I cannot control or fix the things I am most concerned about. I will not watch any more political debates or ads on TV. I do not want to discuss it either. Deep breaths.

Bless all of my friends who then commenced to worrying about me.  Iron Woman, my dear friend who loves France almost as much as I do and may have been Jeanne d’Arc in another life, brought me a Chai latte.  (She knows my weaknesses.)  We went to dinner on Tuesday and I was beginning to feel a bit better about the world after a dish of house made pasta at The Boot and a glass of Pinot Grigio.  Mostly it was the conversation and the chance to laugh with this dear girl.  We both desperately want to have our DNA tested and find out if we are any percentage French.

Another friend brought me an apple fritter– a sinfully delicious pastry with cinnamon and apples.  I didn’t even take a photo of it.  But I did manage to make it last for three days and I savored every crumb.

One other friend sent a private message to ask me if I am okay.  I answered back that I am, but that I have sworn off politics and debates.  I will vote.  I will volunteer to get folks here in Durham registered to vote, but other than that, I am done.  What will happen will happen, n’est-ce pas?  It is what it is.  C’est comme ça.

By Wednesday, I was less grouchy, maybe a 6 on the grouchy scale.  I had plans to go to a wine dinner at Pompieri Pizza with Arles Lucy.  We love the special dinners at PP and Bull City Burger and Brewery.

I have to admit, however, that I didn’t really feel up to it.  I thought about texting Arles Lucy (on the left above) and asking her to find a replacement to go with her.  I am so incredibly glad I didn’t.  You know how sometimes you don’t think that you are going to have fun at a party or whatever and you have an amazing time.  The San Marzano Wine Dinner was exactly what I needed.  Great food, great wine, even greater company.  Before I begin with the feast, I have to say that I know that I am a very lucky eater.  I am constantly amazed by how lucky I am.  And very grateful.

To quote directly from the menu:

POMPIERI PIZZA welcomes Cantine San Marzano and special guest Salvatore Ricciardi, vineyard owner and sales and marketing manager for San Marzano winery. In 1962, nineteen vine growers from San Marzano, whose families had farmed the land for generations, combined their efforts to establish “Cantine San Marzano.” The winery is located in Apulia, in the heart of the acclaimed d.o.p. “Primitivo di Manduira” area.  This strip of land between two seas, the Ionian and the Adriatic, in the province of Taranto and Brindisi,  is where vines and olive trees flourish side by side on the red soil surface, much like North Carolina’s red clay. 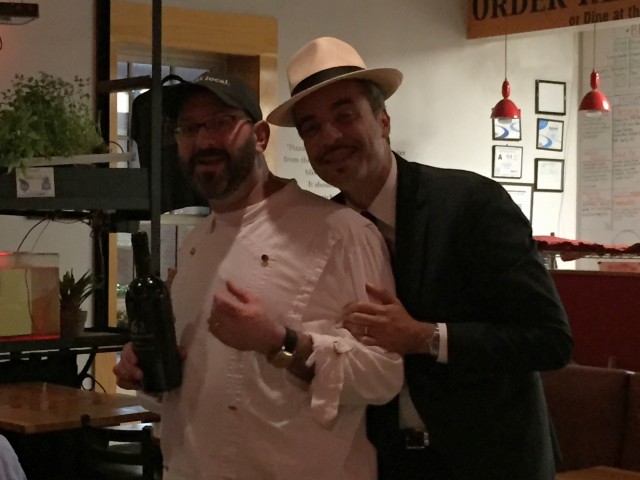 A certain someone sitting directly across from me was heard to say that she could easily eat seven of these.

And Seth, owner and punster, said “You can’t beat that first course.” hahaha

I did not lick the bowl clean, but I thought about it… 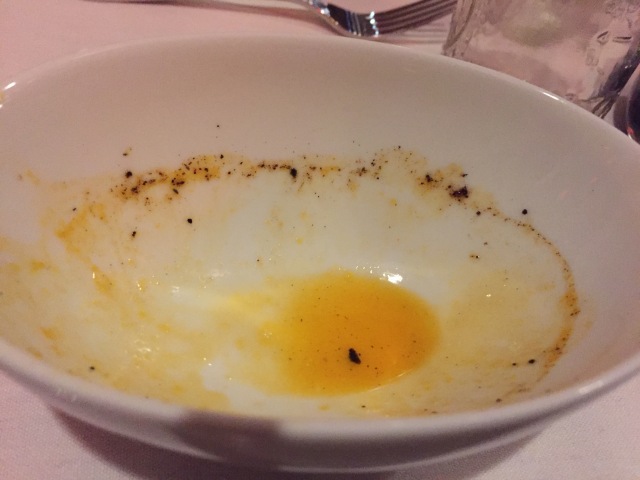 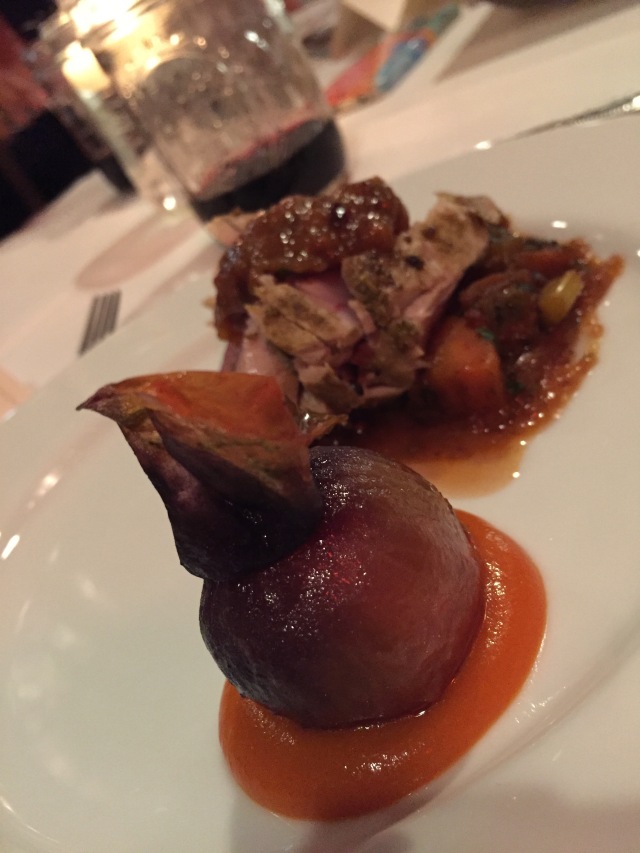 There was another wine sampled served after this one.  A special anniversary wine?  A different vintage?  The details totally escape me at the moment.  It was an extra treat.  Grazie, Seth and Salvatore!

As I was served my dessert, I was told that I got the one with the most chocolate.  I am special that way. 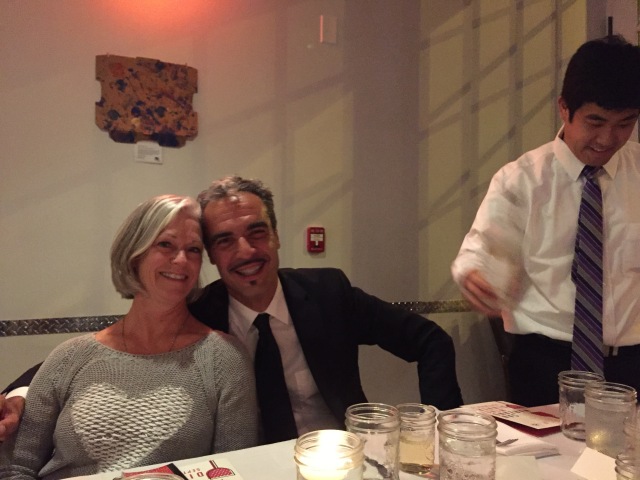 I had fun sitting next to Salvatore.  Quite the charming, handsome Italian.  He told his daughter that Seth had closed the restaurant early because a celebrity was coming.  She texted back calling him the Italian Justin Bieber.  (We had to explain who that is.)  Jin served the wine impeccably.

Salvatore made the rounds and addressed the group, explaining his wines and the growing region. 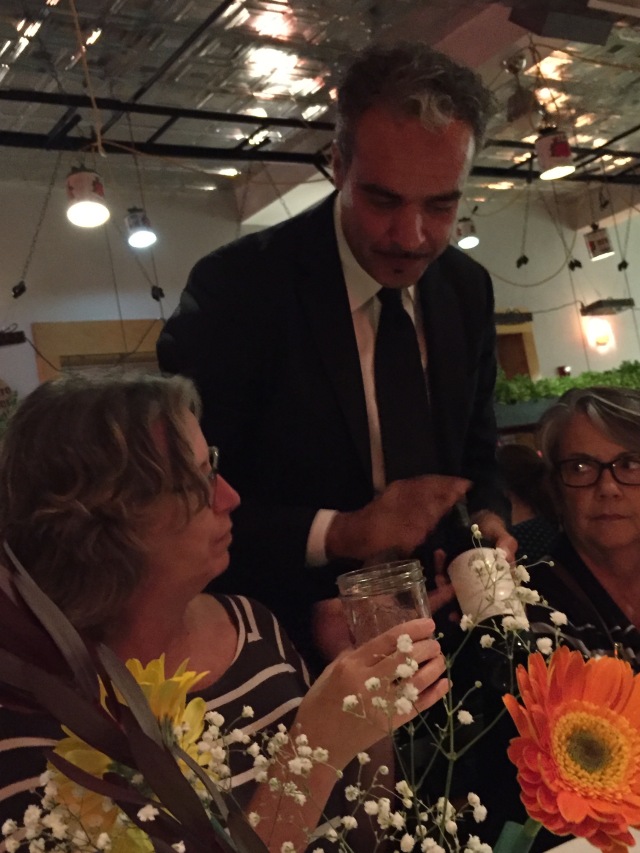 “Easy to drink.  Respect the characteristic of the grape.”

When we started trying to figure out which wine we liked the best and why (Do I really have to choose??), Salvatore said “When you can’t describe it, it’s love.”

I loved every bite and sip.  I also loved meeting Heather and Jill from Habitat for Humanity, who sat across from Arles Lucy and me.

I love my BFF for being herself as well as a great server.  Doesn’t she look beautiful in her Villeneuve-lez-Avignon market ruffles?  I love Arles Lucy for always making me laugh and for always being up for an adventure.  We’ve had some great ones. 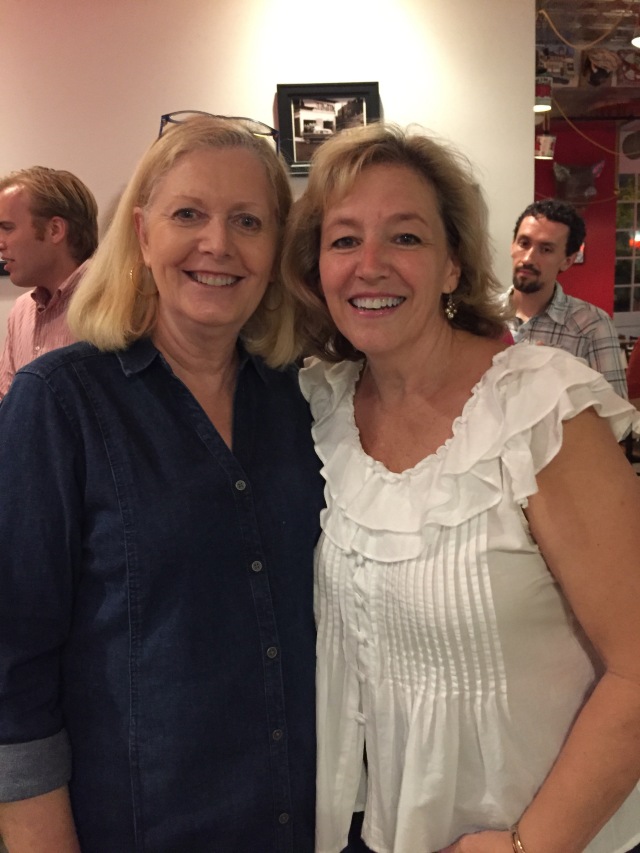 What a delicious night.  Thank you, Seth and Chef Jeff (sadly no photo of him- we haven’t even been properly introduced yet.)

I solemnly swear to stay away from the news and to stick to uplifting activities involving my friends and family.  And good food, bien sûr. 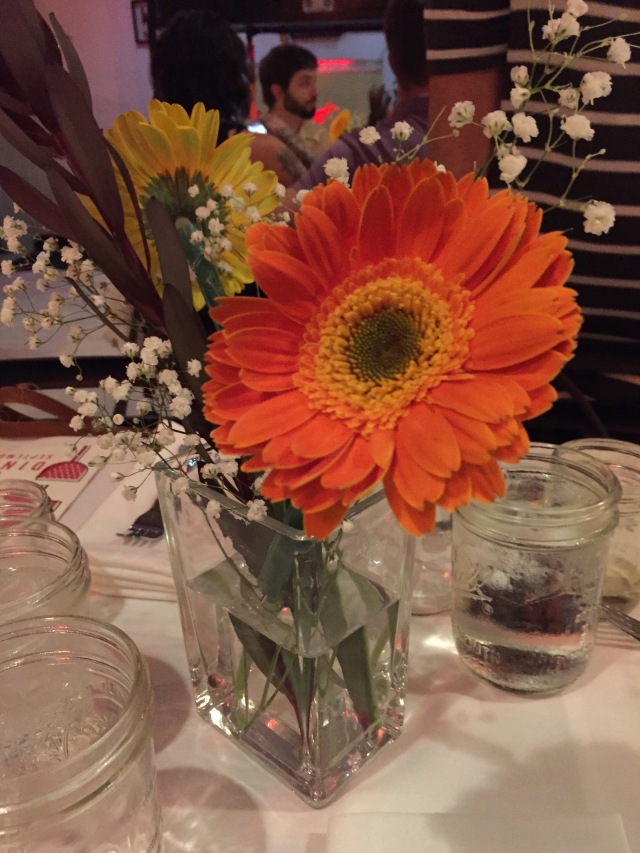 Bon appétit to all cookers, eaters, and wine makers!