One Girlie I am particularly fond of likes to say “Mrs. E, there are no coincidences.  Things happen for a reason.”  I completely agree.  But I am still astounded sometimes when I run across what, on the surface, seem to be totally unrelated facts or events.  Here is what happened to me yesterday.

Saturday, I went up to the mountains to check on Mama Mildred.  She has not been feeling well for a couple of months.  And when Mildred misses Sunday church services it’s serious. Last week, she saw a specialist in Asheville who did blood tests and discovered that her liver is seriously out of whack.  A blood clot maybe?  A tumor?  More tests, a scan, and a biopsy followed.  With a promise from the doctor to call her on Saturday with the results. We waited.  And waited. Mama finally gave up around 9:00pm and went to bed.  She is exhausted all of the time, but she only said that she guessed the results hadn’t come in yet and she was sure he would call on Sunday.  The phone rang at about 30 minutes later. Sister Moo answered. (She and my mom live together.)  Lo and behold, it was the doctor.  It seems that the medication Mama had been taking for an infection has caused liver damage.  Thanks to my friend Google, I found this on WebMD–

This drug may rarely cause serious (possibly fatal) liver disease, blood or nerve problems. Tell your doctor right away if you notice any of the following rare but very serious side effects: persistent nausea/vomiting, dark urine, yellowing of eyes/skin, unusual/persistent fatigue, fast/pounding heartbeat, numbness/tingling of the arms/legs, muscle weakness.

The fine print.  And as I have heard more than one mountain person say “If the sickness don’t kill you, the medicine will.”  I am not that cynical and am thankful for modern medicine, but still…

Mama Mildred will go back for more blood tests this week and enroll in a study through the University of North Carolina-Chapel Hill medical school for others like her.  At least her oldest daughter has told her to. The doctor running the study will be in Asheville next week and hopefully she will go meet him.  (If she considers backing out, I will drive back up there, put her in the car and take her my own self.  Not that I am bossy or anything.)

I left Spruce Pine Sunday afternoon and decided to drive back through Linville and Boone instead of down the mountain to Marion and straight to I-40.  I wanted to see the scenery. It is good for my soul to see that stretch of road.  US- 221N and NC-105N.  Mitchell County to Avery County to Watauga County.  Through Linville, at the foot of Grandfather Mountain.

I spent three summers working at Eseeola Lodge in Linville.  They hire college students to work in the summer.  At least they did in the late 70’s and I hope that they still do.  Those were amazing summers.  I worked as a waitress and met some wonderful people.  Mr. Pottle, who ran the Lodge at the time, took me under his raspberry-colored jacketed arm and designated me as waitress to the folks who came and stayed for the summer.  Major and Mrs. Lane particularly stand out in my memory.  She had to have baby gherkins on her table.  Not much of a tipper at the end of the summer, but what a character.  I stopped at the Lodge, now quiet, and wandered around, taking lots of photos, picking up some beautiful red leaves and a couple of rocks.  (The BFF always insists on a rock.) 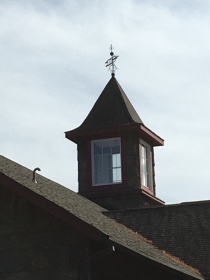 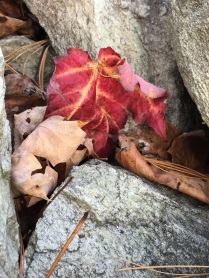 I got back on highway 105, heading towards Boone, with an eye on the clock and a desire to get home to Durham before dark. But as I drove past St. Bernadette’s Catholic Church something made me turn around and go back.  I had it in my head that this is where my high school French teacher, Mme Buchanan, went to church.  But she attended St. Lucien’s.  Anyway, I drove up the steep drive to the church, just to see what was behind the church.  Maybe a cemetery?   At least a great view of Grandfather Mountain and the Mile High Bridge, if nothing else. 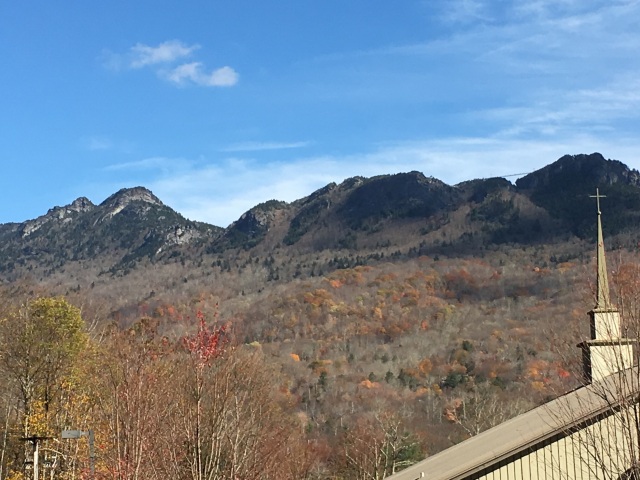 I wandered around, went into the chapel dedicated to St. Anthony of Padua, said a short prayer, took some photos, and went back to my car. 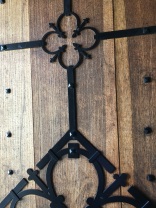 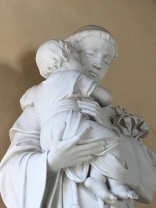 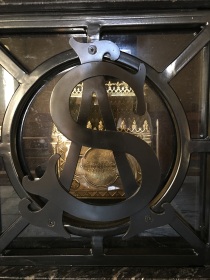 I left an offering and took a little packet containing a prayer and medal. 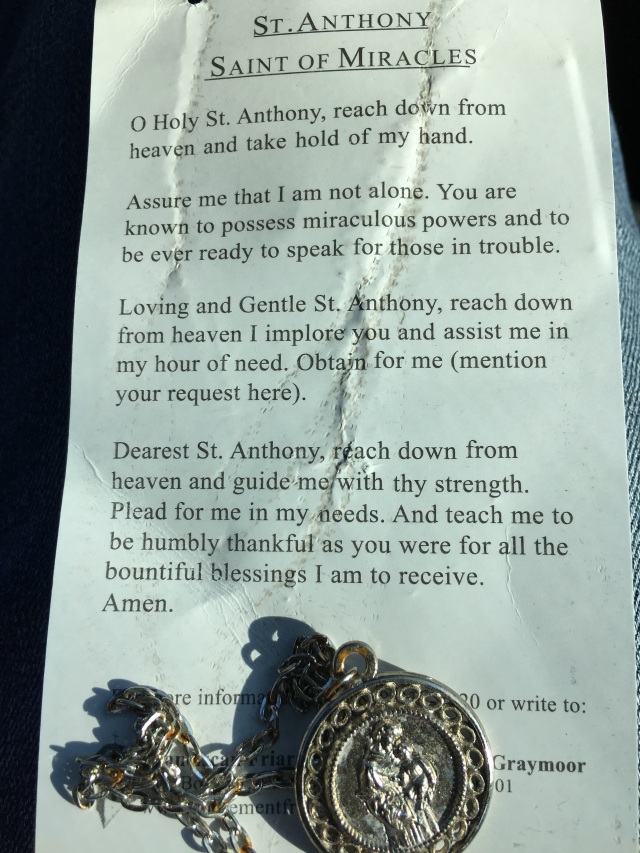 I am not Catholic.  I am a reformed Southern Baptist, as I like to say (but absolutely not in front of Mama Mildred).  I do believe in a higher power or powers.  I think that this Power wants us to help our fellow man and that He/She could care less about our politics or who wins a football game to be perfectly honest.  Mama was raised in a serious Baptist home. She is a bit suspicious of Catholics, but we can’t hold that against her.  She did go to the Catholic church once for my cousin’s son’s baptism. I may not be Catholic, but I light candles in every cathedral I enter and offer up a little prayer for the safety of my loved ones and thanks for the life of Mme Christiane Roze Buchanan, my beloved French teacher.  I filled in the blank of the prayer above with:

“Obtain for me good health for my mama.”

Short, sweet and to the point, St. Anthony, Saint of Miracles.  He was a Franciscan monk who lived from 1195-1231.  He was canonized only a year after his death.  It seems his body was exhumed 336 years after his death and his tongue was found to be totally intact although the rest of his body was “corrupted.” He was known for his “simple and resounding” teaching and taught occasionally at the universities of Montpellier and Toulouse in my beloved southern France.  He is the patron saint of lost articles and was known for his undying devotion to the poor and sick.  Mama Mildred is both, dear Anthony, so send her some love, please.  How can it be fair that a woman such as my mother can work for at least 50 years of her life, at mostly minimum wage jobs, raise four children plus a mostly lovable but irresponsible alcoholic husband, finally retire and try to live on her social security check?  Answer that one, politicians?  How was she supposed to save for retirement?  You try it and see how easy it is, Senator or Congressman Whomever. Anyway, I digress.  Back to my story.

As I got in my car, I noticed what looked to be a statue across the parking lot.  I decided to walk up and check it out.  It turned out to be a grotto dedicated to St. Bernadette, the namesake of the church.  As I approached it, I realized that this is why I felt the pull to turn my car around and visit this spot.  St. Bernadette of Lourdes.  I have never visited Lourdes, in southwest France near Spain, but I have read about her. 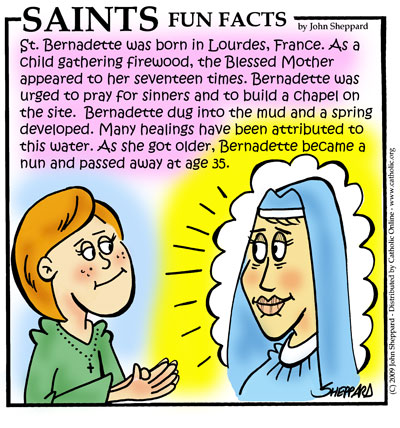 Bernadette lived from 1844-1879.  She was beatified in 1925 and canonized in 1933.  She is the patron saint of illness, people ridiculed for their piety, poverty, shepherds and shepherdesses.  Thousands of sick people flock to Lourdes every year, hoping for a miracle cure.  We can’t make the trip to Lourdes, but it felt rather holy at this grotto yesterday, as I lit a candle and said a prayer. 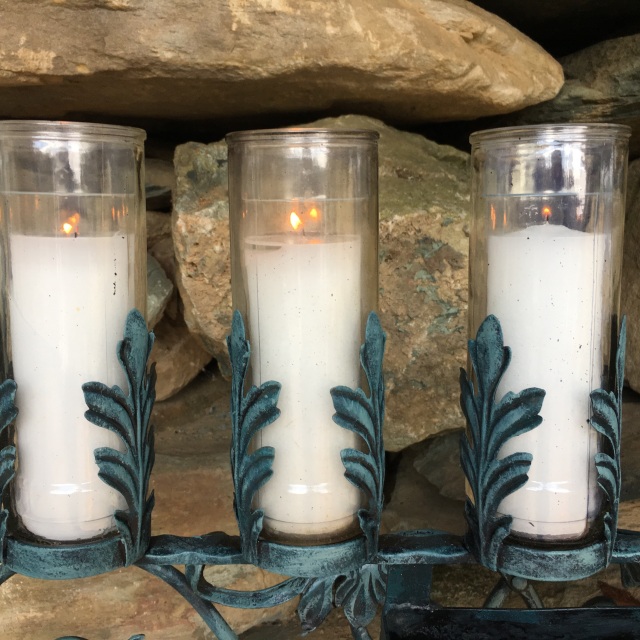 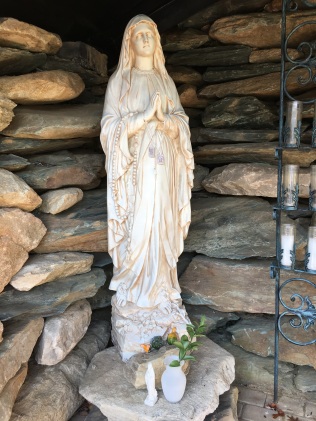 As I researched Bernadette this morning, I found the quote below, written by Dr. Comte upon the 1928 exhumation of Bernadette’s body.  He published his findings in the Bulletin de l’Association medicale de Notre-Dame de Lourdes.  A coincidence?  I don’t think so.

“What struck me during this examination, of course, was the state of perfect preservation of the skeleton, the fibrous tissues of the muscles (still supple and firm), of the ligaments, and of the skin, and above all the totally unexpected state of the liver after 46 years. One would have thought that this organ, which is basically soft and inclined to crumble, would have decomposed very rapidly or would have hardened to a chalky consistency. Yet, when it was cut it was soft and almost normal in consistency. I pointed this out to those present, remarking that this did not seem to be a natural phenomenon.”

A pumpkin muffin (baked in a jack o’lantern mold) with apple butter from The Orchard at Altapass.  Yum!

Bon appétit and Happy Halloween to all.  All Saints Day, Toussaint, is tomorrow.  Say a prayer for Mama Mildred or send up good thoughts to whatever higher power you believe in.

5 thoughts on “There are no coincidences”