It’s post-Thanksgiving, T + 3, but I am still thinking about all I have to be thankful for in my life.  I have fallen into a post-election sadness.  Not depression, but a deep sadness for my country.  Politics aside, seriously, it’s not Democrat vs Republican.  It’s about treating others, those different from us, with dignity and respect.  We lost that in the 2016 presidential election. We now have a group known as the Alt-Right who think it is okay to bring back some sort of Heil Hitler mentality.  I am uncomfortable in all-white Protestant settings now because it isn’t what I want my world to look like.  I like differences.  The day after the election, I sat down to face my 11 advisees and looked into a group made up of 6 girls and 5 boys, one red-head of Italian heritage, three African Americans,  three Asian-Americans, one French-Asian genetic combination, and a couple who look like me.  White European Americans.  We all came from somewhere.  Unless you are Native American, your ancestors came over on a boat or maybe in an airplane.  My ancestry?  Turns out that I am (according to Ancestry):

I looked at those 12 year-old faces on November 9 and told them that we are truly only in control of how we behave, how we choose to treat others. I, along with two 7th grade girls, challenged them to Spread the Kindness and do something kind for one person each day.

Son #1 lives close by so we discussed the election quite a bit.  We have the same views.  Son #2 lives a couple hours away from home and texted me a day or two after it was all said and done “The sun is still rising and the people I love are ok.  As selfish as it may be considering the circumstances, I’m going to take refuge with those two facts until I can think about everything with a clear mind.”  I have decided to take refuge in that as well.  The sun is indeed still rising.  Spectacularly some mornings.  And it is still setting beautifully as well.

I spent Thanksgiving in the mountains of North Carolina.  The view from the living room of my sister and brother-in-law’s house–

It reminds me of the woods behind my Granny’s house on a mountaintop in the Estatoe/Penland section of Spruce Pine.  My siblings, cousins and I spent hours making towns and playhouses under pine trees and rhododendron bushes.

The Ex-Ex’s parents made the trip with us.  We had almost the whole E clan there.  (We missed you D, K and M.) 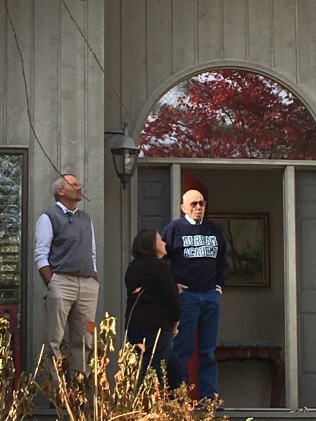 We had an abundant amount of food. 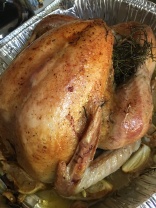 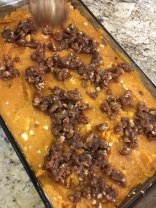 We have two grandbabies on the way.  Thanksgiving next year will be quite different!  A pink cake pop- an ingenious way to let the family know what you are expecting. It took three of them and more than a few minutes for it to sink into my dense head.  I like to provide a laugh whenever I can.

My children barely tolerated my picture-taking.  One of them quite openly hates it, but puts up with me for a little while.  Can you guess which one?

Actually, from the looks on both boys’ faces, it might be hard to tell.  Too bad.  Mom wins.  (Thank you for smiling, EB!)

I got a few minutes with Mama Mildred and Sister Moo in Marion on the way to Brevard.  I had a couple of things to deliver and they met us right off the interstate.  Mama Mildred is on the mend (Merci, St. Bernadette) and Sister Moo is busy volunteering to take care of the firefighters who have come from all over the country to help fight the fires that have been raging for weeks in our mountains.  Love you more, Moo.  Bless you.

As I stood stirring a praline topping for this morning’s baking adventure, the thought popped into my head that in just a couple of years I will have a baking apprentice.  Sunday mornings will be my time to teach the soon-to-be-born Kennedy all of my secrets.  That thought alone is reason enough to get up in time to see the sun rise every day.

What to do with the leftover bread from Thanksgiving?  Eggs, milk, cinnamon, butter, vanilla, brown sugar, and a few pecans will solve that problem. 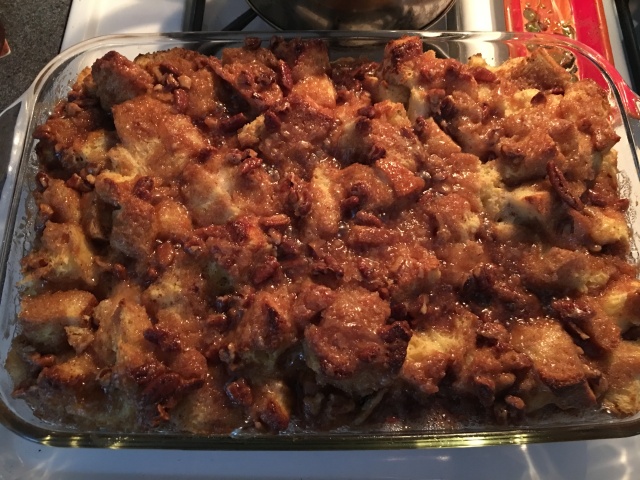 based on recipe from allrecipes

5 c. bread cubes (I probably used more- I had leftover sourdough and Italian-style bread), best if a bit stale

2 Tbsp. sugar (I used Turbinado, but granulate white sugar would have mixed in better)

1 Tbsp. light Karo corn syrup (I found some without high fructose corn syrup which is, according to a chef friend, the work of the devil, to be avoided at all costs)

Mix eggs, milk, sugar, cinnamon, salt and vanilla.  Pour over the bread and stir to coat.  If mixture seems too dry, add another egg and some milk beaten together.  (You do not have to be precise!)  Allow to sit for 10-15 minutes.  (You can refrigerate it overnight as well if you like to do things in advance.)

To make the topping, melt butter in a small saucepan along with the pecans, cinnamon, corn syrup, and brown sugar.  Bring to a boil, stirring constantly.  Spoon it over the casserole.

Bon appétit to all those out there who are thankful.  Keep smiling and Spreading the Kindness.  Wake up early and watch the sunrise!