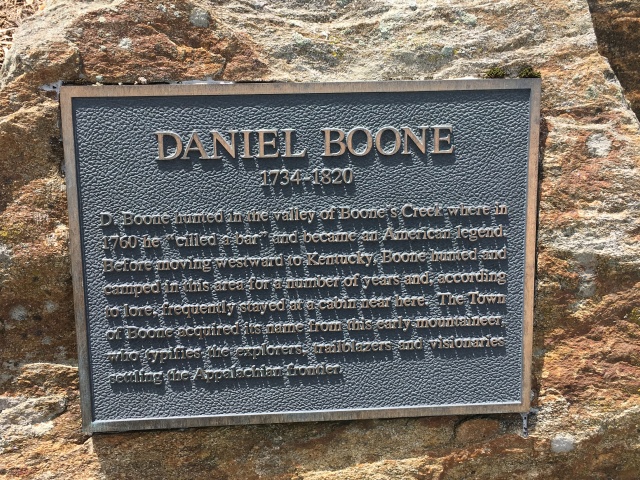 I attended and graduated from Appalachian State University in Boone, North Carolina.  It was really the only school I was interested in.  I applied to UNC-Greensboro but never had any intention of attending. Not sure why I even wasted my hard-earned money to apply. I was very happy at ASU. College life suited me. I met the girl who was to become my best friend during freshman orientation.  Rest in peace, Melody.  I still miss you. I embraced becoming a Mountaineer, wearing black and gold and attending football, basketball, field hockey, and baseball games.  I even went to one wrestling match because a friend asked me to come watch. The campus has changed so much since my days there.  That’s a good thing.  It shows progress.  I had classes in these two buildings.

I didn’t venture over to the part of campus where my dorm is or where I took French classes. Not sure why.  I did pay homage to Yosef, our mascot. 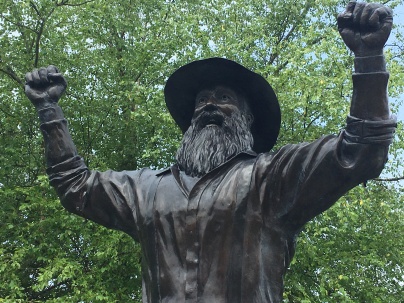 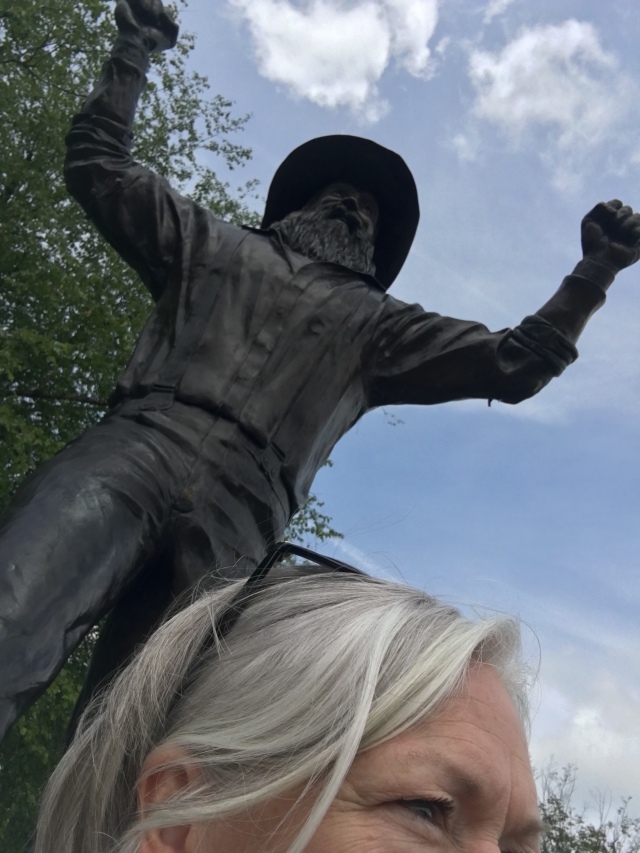 Needless to say, I did not see anyone I knew.  It was orientation for freshman so there were a lot of parents of Mountaineers-to-be roaming around.  I talked to a couple of them. I took both of my boys to their freshman orientation— UNC-Wilmington and UT-Knoxville. Sad and exciting all at the same time.  A parental rite of passage. (I am really not very good at this selfie thing.  I take them when no one is looking because I am mortified that I am actually doing it. And how the heck did I go from wide-eyed freshman to wrinkles so fast?? Someone explain that one to me. Please. And while you are at it, slow the clock way down.)

So.  Food is very important to the Sabbatical Chef, as you know. After the campus crawl, I set out to find a restaurant I had read about thanks to the BFF and Our State magazine. Proper.

I had what I can only describe as an epic lunch.  Legendary. I had already made up my mind to try the Tomato Pie that was described in the magazine article. Then the waiter started reeling off the daily specials. He got as far as baked grits before I interrupted and said “I’ll have that.” 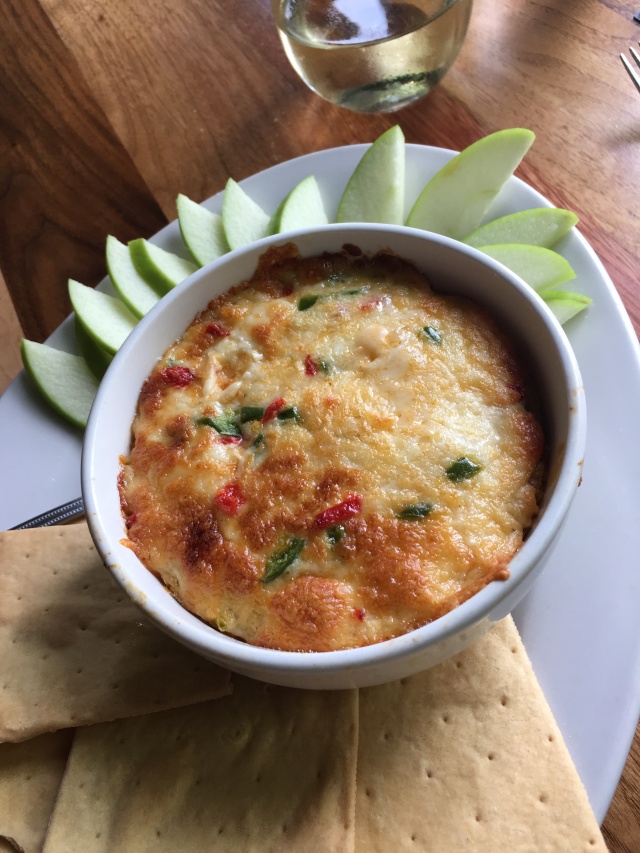 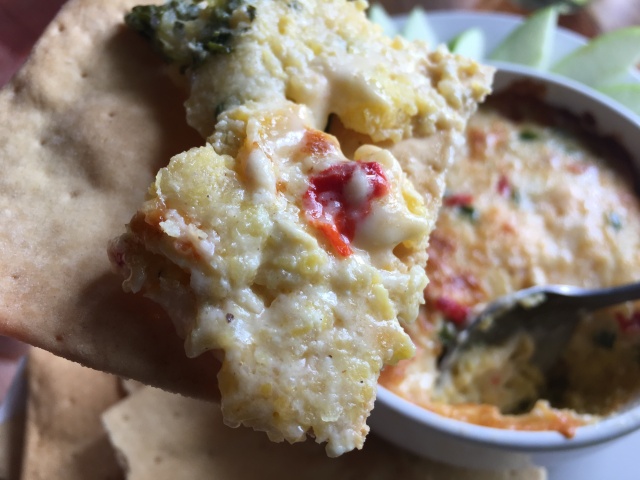 I still ordered the tomato pie.  I knew that I would be offered a to-go box to take my leftovers home for dinner.

Sides of collards and succotash.  A biscuit for me, please.

A warm biscuit with melted, dripping salted butter.  Heaven in a little square. 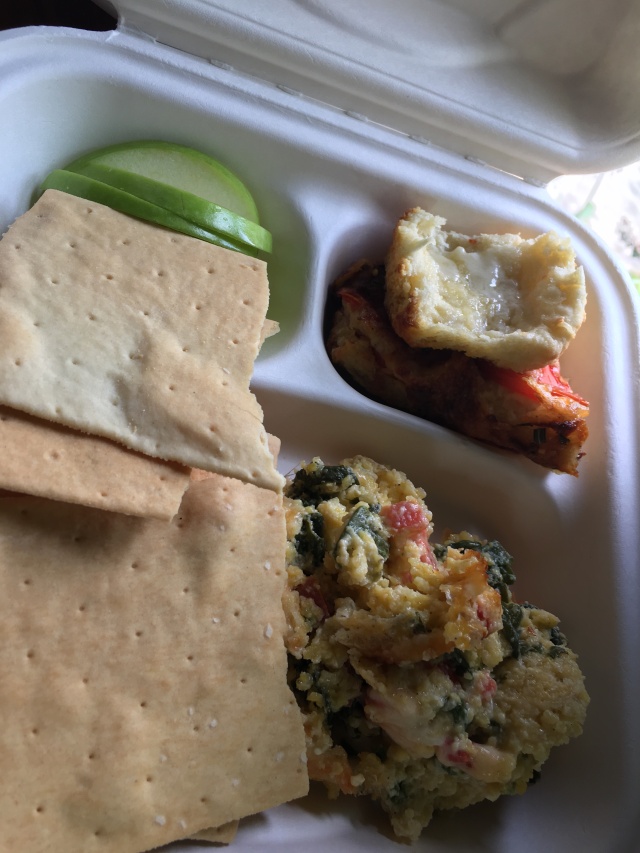 Next on the tour, roaming around downtown. Lots of restaurants and shops now. Antiques/junk, consignment, Watsonatta is still selling the much coveted by me cowboy hats and boots. Still haven’t bought anything there, but I sure love to look.

Speaking of Watson, I met up with Doc Watson on the street corner.

A legend. I love this statue that was placed here in the town where he got his start. 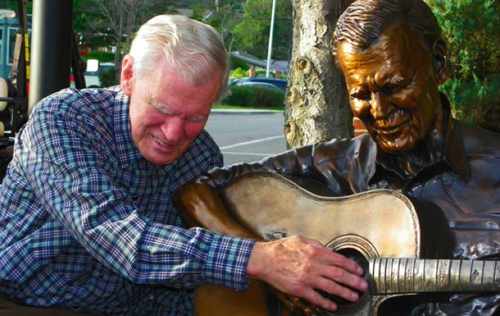 Next up, a visit to Appalachian Mountain Brewery.  I recently tasted one of their ciders and wanted to drink one on the premises.  Keep in mind that back in the day ( meaning my college years) Boone was dry (meaning you could not buy alcohol). Carloads of stupid coeds drove the 8-mile stretch to Blowing Rock and back on Thursdays for happy hour (meaning there was no such thing as Uber). The drinking age was 18, but I thank my lucky stars every time I think about this. I didn’t know anyone who died on the way back to Boone. That’s a miracle. I didn’t have a car so I was never behind the wheel.

Anyhow, I enjoyed the afternoon sun and cool breeze and sipped a Mystic Cider. Strawberry, rhubarb and green tea. I took my writing to the great outdoors on their patio.

I talked to a couple from Charleston, SC whose son is considering Appalachian.  And they are considering buying a place up here. A great idea, in my humble opinion. And I saw one of the bartenders from Blind Squirrel Brewery in Plumtree.  I felt kind of like a local again.  Actually recognizing someone.

It was a lovely, delicious day.  I intend to try to replicate the tomato pie when I get home. Until then, my Provençal Tomato Tart will have to do.  Proper’s crust is made from biscuit dough…

Preheat oven to 400 F.
Place the crust in a pie plate. Prick the bottom and sides and use pie weights, if you wish. Bake crust for about 10 minutes.
Brush the bottom of the warm crust with the mustard. Layer shredded cheese on top of mustard. Place sliced tomatoes on top of cheese, overlapping them just a bit. Sprinkle with herbes de Provence. (One friend makes a second layer of cheese and tomatoes.) Bake for about 20 minutes or until tomatoes start to shrivel and crust turns golden brown. Remove from oven. Sprinkle with salt.

Crust
(A great basic unsweetened crust for general pie-making.  It can be pre-baked for cream pies or used unbaked for filled pies.)
This recipe makes enough dough for four 9-inch pie shell bottowms or two pies with top and bottom crusts.

Stir the flour and salt together in a large bowl.  Cut the chilled butter into the dry mixture using a pastry blender or by pinching the fat into the mixture with your hands.  The resulting mixture should have lumps no smaller than peas.  Add the vinegar to the chilled water.  Slightly beat the egg and mix with the water/vinegar.  Pour the chilled water mixture into the dry mixture, a small amount at a time, mixing gently with a fork until the dough is wet enough to be packed into a ball.  The dough should be handled as little as possible to prevent the blending of all of the fat lumps.
Split the dough into 4 equal amounts, roll them into balls and wrap them in plastic before placing them in the refrigerator to chill for at least 30 minutes.  Generously dust a clean, dry surface with flour and remove one of the packages of dough from the refrigerator.  Flatten the dough slightly and dust the dough’s top before rolling the dough out with a rolling pin.  Start rolling at the center of the dough and work outwards.  Quickly roll the dough into a circle 1/4 or 1/8 inch thick.  The size of the circle should be about 4 inches wider in diameter than the pie pan.  Carefully place the dough in the pan and press it into the pan, being careful not to press the dough too thin.   Cut the pie crust slightly larger than the pan and crimp the edges.
(Unused crust can be flattened a bit, wrapped in waxed paper, placed in ziploc bags and frozen.  When ready to use, remove from freezer, allow dough to come to room temperature and proceed with your recipe.)
Line the crust with a parchment paper circle and fill with pie weights, dried bean, or rice.  Place crust in a preheated 425˚ oven for 5-6 minutes, just until it begins to brown.

This little guy has been flirting with me and playing hard to get for a couple of days.  Finally snapped his photo!