Should I wish France Bonne Fête nationale or Joyeux 14 juillet or Bonne Bastille or … just what?  Does it even matter?  I could sing La Marseillaise.  The bloody version or La Marseillaise de la Paix by Chanson plus bifluorée.  Bertrand of My Private Paris turned me on to this group. What do you think?

Or the peaceful version?

I guess it depends on your mood?

I prefer to look at all the lovely photos on Facebook and hear about what Judy C and her picture-taking Hubby are up to in France.

Let’s start with Virginia Jones’ magnificent photo from her website Paris Through My Lens:

I actually watched this year’s celebration and fireworks by live stream on my computer. Not the same as being there, but what’s a girl to do?

This one I found on a fellow French teacher’s page:

Here’s the line-up for the military parade on the Champs-Élysées, also taken from FB:

I would love to have been on top of the Arc de Triomphe to watch! The first time I was in Paris on le 14 juillet was in 2006 with the Arles 6. We didn’t have that view! We were farther down the boulevard, with a couple of the people in the group standing in the Gucci window, I believe. I was afraid they would set off the alarm and the gendarmes would come take them away in handcuffs. I was standing on top of a trashcan alongside AG, trying to get a good view of the goings on. We were actually on a little side street where some of the participants were lining up. I love men in uniform…

Only later were we able to get a good view of the Champs-Élysées and some tanks.

I was there again in 2012 with my BFF Trip girls. Not the best filming in the world.  We were with about a gazillion of our new best friends watching from a street near the Bir Hakeim metro stop, if I remember correctly.

And my photo of the Leaning Tower of Eiffel.  No idea how that happened. Too funny. I had not had too much champagne, trust me on that one. 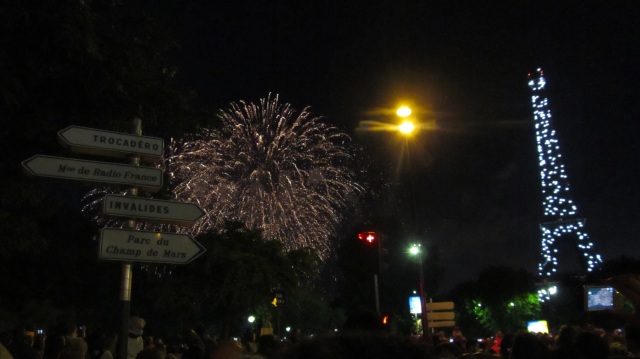 It was our last full day in Paris. We started the trip in Paris, headed south to Villeneuve-lez-Avignon for a week of traipsing around lavender fields, visiting a goat farm, tasting wine in Châteauneuf-du-Pape, and visiting friends.  Most of us then came back to Paris. At the TGV station in Avignon with Frenchie and his lovely wife:

JC and I stayed on for an extra day to visit Mont Saint Michel. Her special place. 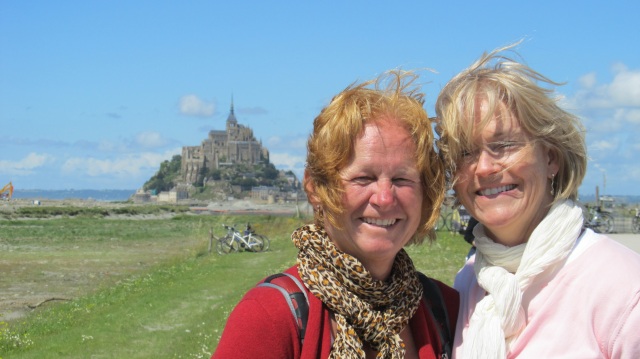 She was just there a couple of days ago again with her Hubby.  He sent this amazing photo–

I hear they are having a fabulous time- eating, drinking, meeting lots of Frenchies, seeing a lot of the beauty that is France. (Word to the wise– do not try to go to France unless your passport is valid for at least 3 months after your departure. They won’t let you on the plane. Due probably to the fact that no visa is required for stays shorter than 90 days.)

In 2012, for our last meal in Paris, we ate a few typical French dishes in a little café. 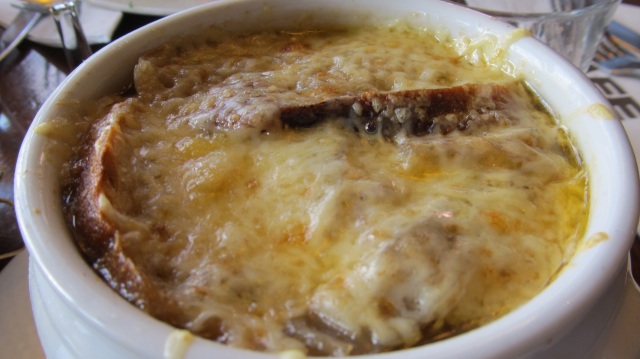 Think my Sister-in-law found the raspberry cake to her liking??  I’m guessing oui. A sweet fit of eatin’. 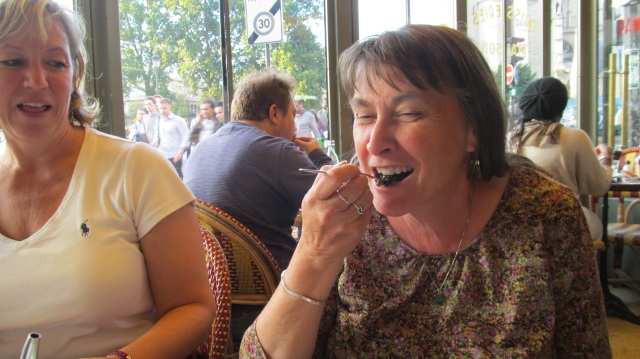 Anyway, back to the present.  Think I will go stir up some Nutella brownies to take to a going away party for my Partner in Pink. I will miss her. Off to Miami she goes! Bon voyage, mon amie, et bonne chance! I will still bring back Fragonard perfume, Belle de nuit, for you from Paris.  C’est promis!

This recipe is from Alaska from Scratch who adapted it from a recipe by Mother Thyme.

Preheat oven to 350˚F.  Grease an 8×8 pan (I used an 11×7 pan, greased with the wrapper from the softened butter).
Cream butter and sugar together.  Incorporate eggs and vanilla until combined.  Mix in Nutella until smooth and fluffy.  Add in flour and salt until just mixed.
Scoop batter into prepared pan and spread evenly.  Bake 30 minutes or until set in the center.
Cool at least 10 minutes.  Cut into squares.

*Mother Thyme recipe uses 1 cup of sugar.  I thought they were sweet enough with just the half cup.

Licking the bowl is allowed.  Certainly encouraged. Maybe even a requirement!

Bon appétit et bonne journée!  Celebrate with friends.  Eat chocolate.  Look back on your memories of good times with friends.