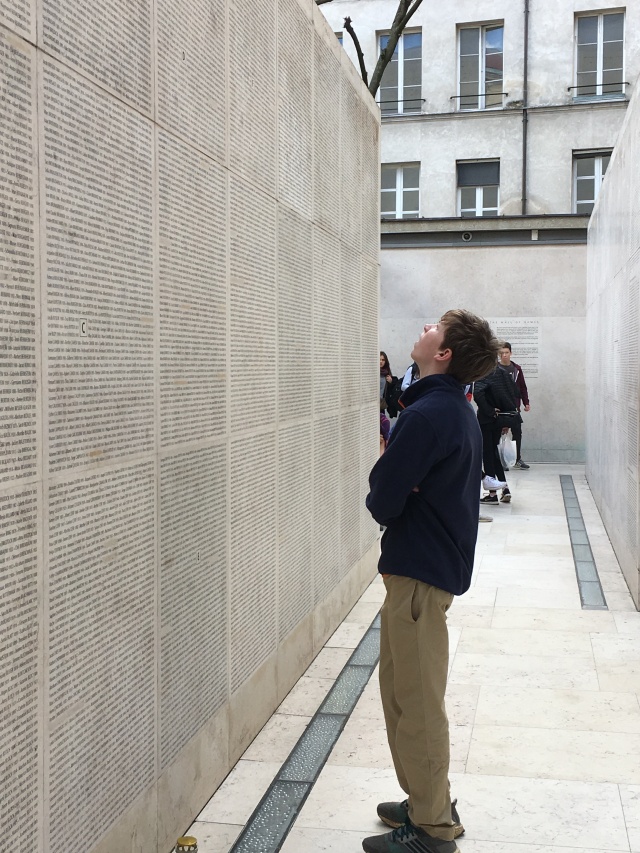 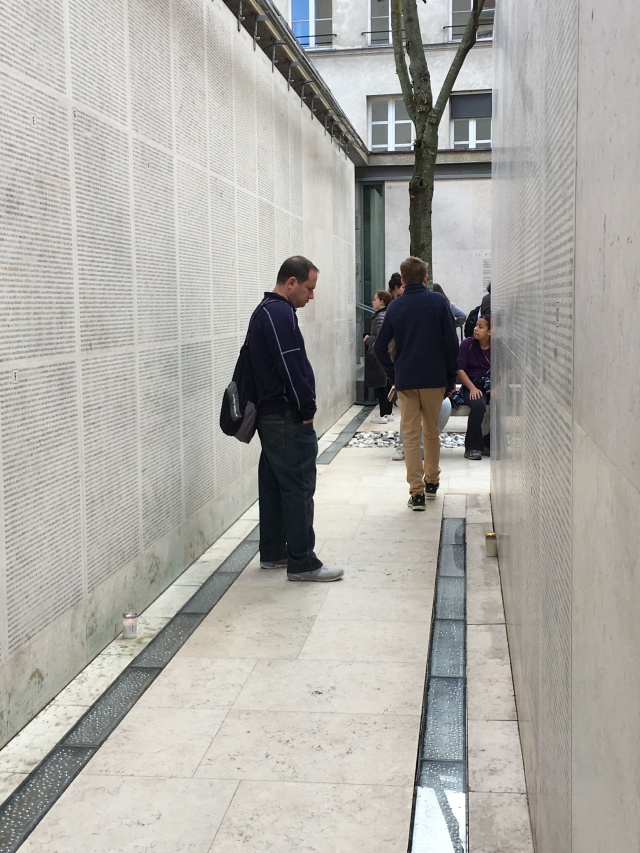 It has only been a little over a month since I returned from France. It was an amazing trip with my co-chaperone and 13 of my eighth grade students. While planning the trip, I discovered that there would be a guided tour in English at the Mémorial de la Shoah. My students and I discuss the Holocaust and La Rafle, the round-up of the Jews in Paris in July of 1942. I show them the movie Sarah’s Key, based on the novel by Tatiana de Rosnay. I have had the pleasure of meeting Mme de Rosnay twice, once by design, once purely by chance. Being in the right place at the right time. In front of the Paris Hôtel de Ville during a rally for women in 2013. She was the guest of honor. All of the women were on motorcycles, including Mme de Rosnay.

I’ve been to the Mémorial de la Shoah several times in the past few years. While in Paris in January of this year, I decided to visit Drancy, the site of one of the deportation camps used during the Holocaust. I have read stories of women who survived the camps or who were hidden children during the Holocaust. I have also read fictionalized accounts of the occupation of France by the Nazis such as All the Light We Cannot See by Anthony Doerr and The Nightingale by Kristin Hannah. My high school French teacher, Mme Christiane Roze Buchanan, lived in occupied France.

On this particular March Sunday afternoon, I arrived with my crew in time for one young lady, who became a Bat Mitzvah in November of 2018, to make a presentation about the Mémorial. (I ask all of the students to sign up for one of the places we will visit and prepare a short presentation about it.) We also had time to take a look at the Wall of Names before our guided tour began (see first two photos). We found a place to sit inside the Mémorial to wait on our guide. There weren’t many places to sit and when another woman came over to join our group, I gave one young man a look that meant “Get up and give your seat to this woman. Now.” He read me well and got up. This woman struck up a conversation with the students she was sitting next to– Where are you from? Why are you in Paris? What have you seen so far? Then the tour began and we took a two-hour journey through the history of anti-semitism and anti-Judaism in France. The tour ended in a relatively small room, with just a few glass benches, and black and white photos of children on the walls. Photos of children taken from their families during the Holocaust. By this time, I was in tears. Just thinking of having my children or granddaughter taken from me is almost more than I can stand. As I sat there, I heard a voice behind me say in French to the guide “J’étais un enfant caché.” I was a hidden child. The voice came from the woman who had joined our tour. The guide asked her in French if she would be willing to share her story. The right place at the right time.

(I am taking this from Monique’s bio- she tells the story much better than I could.)

A “hidden child” of the Holocaust taken in France in 1942, Monique Saigal dedicates the new edition of her book to her grandmother Rivka Leiba pictured on the cover, gassed at Auschwitz September 30th, 1942. A month earlier, on August 24th fearing for Monique’s life she threw her on a train carrying non-Jewish children whose fathers like Monique’s had died. An organization called “the house of the prisoners” helped war widows by sending their children to spend a one month vacation with a host family in Southwest France. Scared and alone, Monique arrived at the train station but there was no one to pick her up. However, a young lady Jacqueline Baleste, waiting for a little boy who did not come off the train, saw the little girl with no name-tag crying in the corner. She embraced her and brought her home where Monique lived with the Baleste family for 8 years in a small village. She was baptized and raised Catholic for fear of surrounding Nazis in this occupied zone.

After she spoke with the group, Monique gave me a postcard-sized card with her bio. And her email address. I attempted to wipe away my tears and hugged her. Later that evening, I emailed Monique to thank her for sharing her story with us. She quickly emailed back and told me that she would be happy to meet us and share more of her story if we had the time. We settled on a time, she came to our hotel with her power point presentation on her computer, and told us more of her story. Several of my students bought a copy of her book. When she ran out of copies, she told me that she would send some more to me as soon as she got back to California. (She was in Paris to visit her uncle, her mother’s brother.)

Monique’s book, French Heroines, 1940-1945, available in both French and English, contains the stories of women “who are little known yet who stand out because of their extraordinary courage during the German occupation in World War II, when they risked their lives, engaging in clandestine activities to overcome the Nazis.” There are eighteen stories because in Hebrew “chai” or the number 18 stands for life. I read these eighteen stories and have even reread most of them because their acts of bravery seem unbelievable to someone who spends most of her time worrying about “first world problems.”  I want to believe that I would have been one of those brave women. But I hope that I never have to find out the limits of my bravery and courage.

Merci, Monique. I will never forget our chance encounter. Thank you for being so very brave. God bless your grandmother and the Baleste family.

The right place at the right time. How very fortunate I am.

As I read about the people who were starving during the war, I realized that although my family didn’t have very much money when I was growing up, Mama Mildred always managed to put food on the table for her four children. I made a very simple soup today and I will pass that recipe on. My recipes such as this one are always a guess-timate, as we say in English. Soups do not have to be exact. That’s probably one of the reasons I enjoy creating them. Someone left a bag of Wegman’s Salt Potatoes in the faculty lounge this week and I claimed them. A 5-pound bag of potatoes with a small bag of salt inside. Go figure!

Thin-skinned potatoes, scrubbed (and peeled, if you wish), cut into bite-sized pieces

Salt and pepper, if desired

In a heavy bottomed pot, heat olive oil over medium high heat. Brown the sausage on both sides. Remove to a bowl and set aside.

Using the same pot and oil, sauté the onions until soft. If using minced garlic, add it at the end, for about 2 minutes, stirring with a wooden spoon.

Put the potatoes in the pot with the onions. Cover the potatoes with chicken stock, broth or water. Add back the sausage. Sprinkle in herbs. Stir. Cover and bring to a boil. Reduce heat and simmer until the potatoes are tender. Taste and adjust seasonings, if needed.

Bon appétit to heroes from all walks of life. Big and small. Rich and poor. Old and young. Jewish, Catholic, Protestant or non-believers. And all in-between. To all who perform intentional and/or random acts of kindness in this world. And remember, everyone has a story. We just need to open our hearts and ears and listen. Really listen.

One thought on “The right place at the right time”